For many years, the only recommended GPS for speedsurfing was the Locosys GT-31. It relied on technology that can only be called ancient - so ancient that the company had to stop producing them because they could not get the parts anymore. During the last couple of months, it has been impossible to get a GT-31 in the USA.

This created a problem for new speedsurfers. Several asked me recently what they should buy, and I could not give them a recommendation. The speedsurfing sites officially allow some Garmin watch-type GPS units, but label them clearly as inferior to the GT-31. But when I recently checked their prices on Amazon, I noticed a promising GPS unit: the Canmore G-Porter GP-102+.

On promising detail about the GP-102+ (I'll call it the "GP102" from now on) is that is uses the Sirf4 GPS chip. That's the successor to the Sirf3 chip that the GT-31 uses, and it has a number of improvements. The other thing I liked was that the unit only costs about $50, compare to about $150 for the GT-31. I went ahead and bought one to test it.

Two days ago, I had a chance to use it while windsurfing. I did two sessions, a freestyle session in 15-18 knots in the morning and a speed session in 20+ knots in the evening. For comparison, I wore my GT-31. In the morning, I also wore my FlySight GPS, which I previously reported as being more accurate than the GT-31. However, the FlySight does not have a display, is not waterproof, and costs $250.

I plan to post a more detailed report later, but here are some initial results. I'll start with the tracks from the first session:
Very similar tracks, very similar speeds. A different view shows some artifacts in the GT-31 tracks:

The artifacts are from wet jibes. The GT-31 tends to loose the GPS signal when you're swimming, and the positions jump around a bit. Here's a blowup from one wet jibe:


Here are the tracks from the second session (with reversed colors):
Here's how the speed results compared in the GPSTC disciplines: 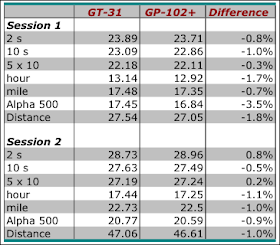 In general, the results are almost identical, with differences typically being around 1% or less. The one exception is the best alpha 500 from session 1, where the GP-102+ was 3.5% lower. Here's this part of the GPS tracks:

The blue GT-31 tracks shows a very sharp turn, which did not happen (I sometimes do jibe with a hook like this, but not without loosing all speed). This is often seen in GT-31 data during low radius jibes: the track continues forward for too long, then turns too sharply. The effect is that the distance covers appears larger than it really was (the difference is about 2 meters). In other words, the GT-31 speed for the best alpha was artificially high. I have seen the same issue many times when comparing GT-31 and FlySight data.

One of the good things about the GT-31 is that is also records accuracy estimates of the data. In sharp turns like the one above, the GT-31 "knows" that it is not accurate, and many data points have SDoP and HDoP values above the commonly used threshold. But from what I can tell, these data points are still used in GPSResults to calculate alphas.

The GP-102+ produces files in Garmin .fit format, which (as far as I can tell) do not contain any precision data. This might seem as a big drawback - but look at the next table first: 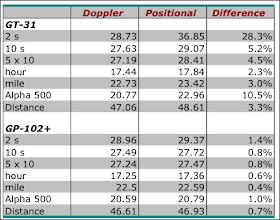 The table shows the difference in speed calculate using Doppler data and positional data. For the GT-31, this difference is large: 28.3% for max speed (2 s), and 10.5% for alpha 500. This is no surprise, and the reason behind the request to always use doppler data when posting to GPS web sites.

But for the GP-102+, the differences are much lower: just 1.4% for max speed, and 1% or less for everything else. In other words, the relative positional accuracy is much higher than for the GT-31. Here's a section of the tracks which show spikes in the GT-31 positional speed data:
Why is this relevant if we only use doppler values for speedsurfing? Simply because positional and doppler data are not fully independent. In the example above, the artifact spikes are missing in the doppler data, but the data near spikes often have substantially lower accuracy values. In one GPS unit from a different manufacturer that I tested, spikes in position speed went up to more than 1000 knots!

I'm a software guy, not a hardware guy, but I know that there is a lot of computation going on to convert the raw GPS signals to positions and speeds. To my eye, the spikes in the GT-31 data simply look like the results of a bug. In later chips and GPS units like the GP-102+ and the FlySight, this bug seems to simply not be there.

This is it for today. The results from using the Canmore GP-102+ for speedsurfing are very encouraging, so I just had to share some of this right away. Stay tuned for more details and tests...

Please note that the GP102 is not waterproof! Several users (myself included) had units break after minimal water exposure. This can happen even inside a water-proof bag if just a little bit of water gets inside the bag. I strongly recommend to double-bag the GP102: put it inside a zip lock bag, and then inside a waterproof armband.